In the era of deterritorialized, dematerialized culture, the role of the site-specific exhibition has taken on new connotations, and the validity of huge group or blockbuster exhibitions – with or without a coherent curatorial thematic – has recently been called into question. “Longing and Belonging: From the Far-away Nearby,” the major inaugural exhibition of the Site Santa Fe Biennial, certainly qualified for such scrutiny. Curated by expatriate Canadian curator Bruce Ferguson, assisted by western Canadian curator Vincent Varga, “Longing and Belonging” brought to Santa Fe the work of thirty-one international artists, most of whom live and work in countries other than their own. The exhibition was the main element of a three-month extravaganza that included performance, lectures and outreach activities into the local community.

Santa Fe is located in a region saturated with culture, history, tradition, spirituality and austere natural beauty; the event ostensibly examined issues around plurality, dislocation, sense of place in general, and Santa Fe in particular. Viewers who traveled to this affluent little town were treated to a re-orienting, ambulatory experience through two exhibition spaces: an open, contemporary, designed warehouse space at the outskirts, and a conventional historic museum site in the centre. More than a linear walk through a series of installations manifesting formal or theoretical affinities, “Longing and Belonging” was revisionist. It transmitted to viewers the curators’ concern with, and empathy (Einfuhlung) for, the way artists function in a territory with no name. “Longing and Belonging” served the binary function of framing or corralling the dispersed and disparate and, conversely, lifting the existing frame-work of the exhibition – deterritorializing it. Viewers were impelled to travel as well, and come to terms with the reality of placelessness.

The post-colonial discourse of nomadology is neither new nor surprising. It has been addressed both in critical theory and artistic practice on a basis that is now more widespread than any systematic discourse on rootedness or belonging ever was. Perhaps it was possible in the past to make work simply taking relationship to place for granted, apprehending issues of origin as given, or unconscious. But now, everywhere, we are all classifiable no-mads, exiles, travelers, ex-patriots or their descendants, with dubious and complex ties to territory. The exceptions are static peoples who physically work the land on which they live, and, paradoxically, traditionally “authentic” nomads, among them North American Native peoples, for whom the notion of territory also boils down to land dependency. In this context, indigenality took on an added dimension within the thematic of “Longing and Belonging,” and the fact that Canada was represented in the show exclusively by Native artists Gerald McMaster and Rebecca Belmore was surprising and eloquent.

Gerald McMaster, curator of contemporary art at the Museum of Civilization, has had a long-standing career as an artist in his own right. His work has gradually evolved from paintings and drawings to multi-leveled, multimedia installations that reflect on contemporary Native experience in increasingly sophisticated ways. In Pow(wer)wow, the sound of drums and singing drew viewers through an antechamber with a striking pictographic mural and into a darkened room with a circle of monitors, facing outward, displaying images of a modern-day powwow. Viewers were invited, or uninvited, to stand or sit on the floor and observe. While the sound was as mesmerizing as at a real powwow, here in the darkened room, possibly alone, we watched only its simulacrum. Excluded from the real event by time, place and cultural difference, viewers were subject to an exclusion that alludes to the one that has historically sidelined Native people to the position of bystanders.

Rebecca Belmore’s The New Wilderness figured prominently in the succession of installations housed in individual rooms in the Santa Fe Museum of Fine Arts. Belmore, a young Ojibwe artist living in Sioux Lookout, created one of the more performative and site-specific pieces in the exhibition with four components: clay casts of mugs she had collected on the drive to Santa Fe mounted on metal-rod pedestals; the same mugs shattered, their shards mounted in plaster in a large mural-mosaic covering the opposite wall; a photograph of herself in the wilderness; and a singular photograph of local Indian artisans selling their wares in the arcade located one block from the Museum. The power of this piece stemmed from Belmore’s sense of personal identification with her subject, and her virtuosic handling of media, something which has also been true of her other work.

The land-based “dreamscape” by Hungarian Imre Bukta was a huge, untitled relief mural, the tarry scent of which permeated the Site warehouse due to the use of railway ties rudely carved into skating angels. These angels formed solid rhythms over the surface, linking black-and-white photographs of fallow farmland from the artist’s rural childhood. The work bore close if coincidental affinities with the agricultural landscape and traditional religious carving of rural Quebec, so that the nostalgia of Bukta’s subjectivity seemed surprisingly transferable.

I was also fascinated by Andres Serrano’s juxtaposition of his 1990 Nomad series – large, lush cibachrome portraits of New York homeless – with Edward Curtis’ famous nineteenth-century sepia photo-portraits of Native Americans, here displayed in beautiful glass museum cases. This juxtaposition of current, common figure types with others depicted a century ago had the effect of bringing two distinct generations of nomadological images together and made clear how pervasive and longstanding some of the concerns and cultural stereotypes around nomadology were and continue to be, even if conscious discussion of them is more recent. 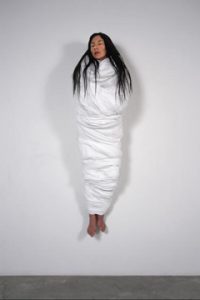 In Mille Plateaux, Deleuze and Guattari drew a distinction between polar nomadic and sedentary cultures, and the smith or metallurgist who occupies the kind of intermediary ambulatory or itinerant space between. In “Longing and Belonging,” Ferguson refused to define the themes of place and belonging or to furnish heavy-handed interpretations of nomad-artists to a sedentary public, preferring instead to simply bring them all together into a space and thematic he himself shares. Functioning as a smithcurator, a hybrid double agent between artist and public, he turned the space of the exhibition into neither striated nor smooth space, but cultivated it as a connected, conjugal space somewhere in between. This transitory dialectic space/methodology, while less tidy and didactic than usual, is nevertheless legitimate, organic and real – a new, open space within old confines.