Despite such gratuitous use of theory, it largely remains an instrument reserved for the exploration of “serious” subjects. Indeed it is probably not too farfetched to say that some of the most important work done by theory today is the lending of weight to otherwise indifferent ideas. It is to this paradox that Sharon Kivland’s recent work speaks. Like much work concerned with theory, Kivland’s Letters of the Blind (1995) relies heavily on a chic “conceptualesque” aesthetic, the clean assembling of ready-made objects and the citation of theory yet, despite the formal similarity, there is nothing gratuitous about this work’s relationship to theory. Although Kivland has titled the work Letters of the Blind – in a reference to Diderot’s Lettre sur les aveugles a l’usage de ceux qui voient (his treatise on vision) – the wall text directs the viewer away from general references to Diderot and toward an intimate, albeit intellectual, moment between Diderot and his lover Sophie Vaillant. In this exchange Diderot describes how, having returned home late, he writes to her in the dark causing much of what he has written to be illegible. Diderot then explains that where his writing has become illegible she should read that he loves her.

It is here, within the context of romantic love, that the intersection of theory and practice, mind and body, happens in the work. Recalling both the truism “love is blind” and Diderot’s world of the Cartesian subject where geometry (mind/theory) and not sight (body/practice) maps the territory of vision – Kivland has assembled twenty-six small ovals of polished glass behind which are mounted life-sized colour photographs of the tearfilled eyes of twenty-six men and women crying or at the point of weeping. To the right of each oval are a pair of chrome surgical scissors and a large white linen handkerchief on which has been embroidered, in white thread, one of the letters of the alphabet.

Bound by love, separated by language (the embroidered alphabet on the handkerchiefs) and dislocated from their bodies (the scissors recall the amputation) the lovers stare side-by-side into the empty gallery space. Trapped in the philosophical context of metaphysical dualism where theory is the preserve of the disembodied subject, the weeping eyes and blurred vision of the lovers work to represent something of the impossibility for representation structured along such a body/mind schism, whereas the scissors – violently thrust into the gallery wall – suggest that this separation is nothing if not painful. 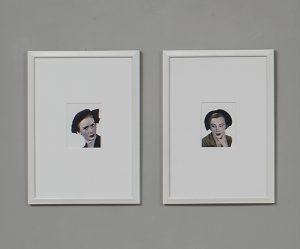 In citing Diderot’s letter to Vaillant, Kivland reminds the viewer that there is a way of doing theory through practice that does not entail becoming a disembodied spirit and, in so doing, the artist throws a spanner in the works of those practices for which theory is used to affirm and not challenge those very ideas against which it was originally deployed. This disruption is further effected by the content and composition of the photographs. These images, which at first glance could appear to be multiples of the same tearfilled eyes – serving more as intellectual motifs than as the distinctive representations of individuated subjects and their pain – eventually manifest themselves as “portraits” of twenty-six individuals. Simple as this realization might be, it changes the terms of engagement with the work as the viewer realizes that the tearfilled stares which have been directed at her from behind those sterile ovals of polished glass come from the weeping eyes of thirteen men and thirteen women for whom love, in its many different guises, is supposed to have inflicted the sort of pain which defies description through the spoken or written word. We come to realize that to understand their pain we must leave behind the sort of cerebral engagement with the work which Kivland invites through her use of clinical materials and the deployment of an established conceptual aesthetic and prepare to negotiate the work through mechanisms of the body.

These paradoxes (the apparent contradictions between form and content, style and intent) are at play throughout this work, confounding the expectations we bring to the interpretation of both ready-made objects and theory in contemporary art. The handkerchiefs held by the embedded scissor points (the type used in operations of the eye) provide a further example of these incongruities. Although there is nothing unusual about the handkerchiefs (they are large and cut from the sort of fine linen reserved for lingerie) or the embroidered letters (monogrammed handkerchiefs like these can be bought at any gentleman’s outfitters), the stitching which forms each letter is sewn so irregularly that they can only have been the work of an amateur embroiderer. While the handmade nature of the embroidered lettering is an almost indiscernible detail, it does serve to reinstate the body within the piece, and through the marks of its labour, offer an unexpected point of (re)entry into a work ostensibly ordered by formal traditions developed in antithesis to its domain.

The text which frames the exhibition, Diderot’s letter to his lover, is on the wall facing the row of photographs, scissors and handkerchiefs. It is with this contrast that the ultimate structural contradiction of the work occurs. By selecting the context of romantic love as the site of theoretical enterprise, Kivland again forces the intersection of mind and body – an intersection made all the more visible by her careful treatment of the lettering which (although rendered in a size and font typically used by the manufacturers of vinyl lettering) has been painstakingly hand-painted in soft gray paint.

In challenging the expectations we bring to work informed by theory and structured within established aesthetic paradigms, Letters of the Blind speaks not only to the practice of theory within art but to the importance of vision as a form of theory in practice.