The minutes tick away until the turn of the millennium, and the paranoid charm of this absurd moment is difficult to resist. For millennial thinking bespeaks anxiety about the calendrical here and now. It suggests that for a moment the arbitrary course of human history might coalesce into a coherent narrative, that telling images of the past and of the future might be reflected onto that single, suspended moment in time. Robert Wilson’s installation HG, on which he collaborated with the sound artist Hans Peter Kuhn, heightens this notion of temporal disjunction, using H.G. Wells’ The Time Machine as a (dis)organizing principle. Dispersed within a decaying, subterranean warehouse in London, the sequence of tableaux presented in HG was haunted by that machine’s promise to effect a bewildering transgression of historical time, so providing visual access into forgotten or prospective spaces. By invoking Wells’ story, the visitor wandering through the disorientating space would also be likely to discover the installation’s visual evidence archeologically, as relics of inaccessible historical epochs.

This is not the first time, in fact, that the translation of Wells’ literary invention into visual terms had been attempted. One hundred years ago, the inventor and entrepreneur Robert Paul immediately saw the potential for using Wells’ newly-published text as the blueprint for a form of proto-cinematic entertainment. And so he rushed to patent his “Time Machine” mechanism, a system of mobile screens and seating, combined with gusts of wind, coloured lights, and other effects, whereby the spectator would be “transported” into illusions of past and future worlds. Like moving panoramas, dioramas, and other early examples of spectacularized mass culture, Paul’s project (which was never built) combined the latest technology with a pictorial inheritance from stagecraft and landscape art. Wilson’s installation re-vists – and to some extent recreates – this finde-siecle moment, before cinema replaced this type of fractured visual experience, amalgamating its disparate effects into a seamless screen-image, beheld by a motionless spectator. 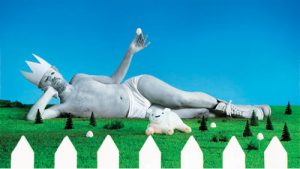 The time-machine, as story/invention, had registered the concurrence of a new visual regime and a precarious future. A preoccupation with futurity was certainly fundamental to modernism; in his recent book about aesthetics and “cultural amnesia,” Andreas Huyssen remarks that “the avant-grade advocated a dictatorship of the future.” H.G. Wells himself obsessively anticipated a range of worlds, both utopic and dystopic, that might shed a guiding light on the present. Upon returning from the year 802,701 A.D., the time-traveler’s vivid descriptions allow his guests to visualize, if not quite believe in, the sublime ruins of Western civilization, the culmination of social exploitation and human devolution. So perhaps what Wilson appropriates from Wells, more than anything else, is an idea of visual experience filtered through a profoundly de-stabilized moment in time. Unlike the modernist paradigm of a transcendent aesthetic moment, the mechanism which explodes history instead renders the present moment uncanny.

We enter the installation directly into a space disposed according to the conventions of anecdotal realism; here is a late nineteenthcentury bourgeois dining room complete with substantial furniture and a display of ornate bibelots. A newspaper dated 1895 assures us that this scenario illustrates the beginning of Wells’ story, when the timetraveler invites a range of guests to dinner. Historical memory is often made available to us in this palpable form – in period-piece movies, in museums, in department-store vitrines. The surface textures of a bygone object-world provide a signifying field whereby the past becomes intelligible. If we accept this phenomenal evidence, then there is no final rupture with the past, and history can be effectively domesticated. In this dining-room it is tempting to say that the final proof of this reality-effect is in the pudding, or at least in the congealing food Wilson has positioned on the plates. But it is this detail which fractures the stability of the frozen tableau. For this rapidly-decomposing organic matter is too much a memento mori, too much a reminder of accelerated time.

Once beyond this first room, the installation changes dramatically. The semantic overdetermination of the first scene is replaced by a compilation of hallucinatory glimpses. For the most part, the emptiness and darkness of the cavernous space predominates, interrupted here and there by isolated objects and theatrical lighting, alluding only obliquely to Wellsian themes of technological change, the destiny of the human organism, the future of nature. The spectator is drawn towards a mysterious glimmer of blue light in the distance, only to discover, having stumbled along in the dark, nothing more than a low-wattage bare bulb illuminating some shards of broken glass. Sometimes, through a crack in the wall, a bleachedwhite Egyptian head, or some pseudo-classical ruins are visible. But these enticing sights, examined more closely, are barely disguised cardboard and Styrofoam contraptions, quite explicitly an Oz-like compendium of cheap effects. Like his work for the 1993 Venice Biennale, Memory/Loss, Wilson is developing a pictorial vocabulary that might approximate the fallible workings of human memory, although what is visually conjured up in HG has a particularly duplicitous and ephemeral quality. This is enhanced by Kuhn’s audio-collage of far-off sounds, music, footsteps, and whispering voices, overlaid by the periodic roar of passing subway trains.

If the spectator has anticipated sharing the time-traveler’s “hysterical exhilaration,” at visions of weird futures and seductive pasts, a sense of bathos quickly sets in. For the installation’s dilapidated bits and pieces are only too reminiscent of the London cityscape framing the artwork. And yet, strangely, it is this immediate world as if perceived from the vantage point of another epoch: our time appears to us either as a remote era or a potential future. In this sense Wilson’s project has affinities with the work of other artists which addresses memory in relation to the entropy of post-industrial London. In Rachel Whiteread’s House of 1993, the cement casting of an entire dwelling becomes an inverted monument to (civic) abandonment. And in Patrick Keillor’s personalized travelogue-film London (1994), images of social and architectural neglect are re-animated by a voice-over recounting intimate and literary memories. 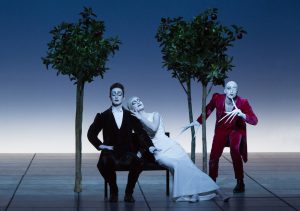 Near the end of the passage through the sights and sensations of HG, the spectator comes upon an ancient wooden door with a barred window, through which Nature (as opposed to History) makes an appearance. If the dining room forcefully imposed its cultural reality upon us, this aperture presents us with its complement in the form of luminous blue-green scenery. Here is the timeless otherness of nature, it seems, complete with a breeze ruffling the leaves on the trees, and the ambient sounds of twittering birds. Access to this space is conspicuously blocked, however, a reminder that this bit of wilderness is just another apparition, as deceptive as any of the other set-pieces in the installation. Should we lament the loss of this fake paradise? HG begins dramatically, but there is a less obvious closure to the trajectory, and the crowd milling around the interior space somehow finds itself ejected into the narrow and twisting streets outside.

Do we have an enhanced understanding of nature or of historical process, having gazed out from within a time machine? Wilson’s work creates a venue where precarious historical subjects encounter the almost dematerialized ruins of an object-world. This is possibly a critique of commodity-exchange, but HG’s time-travelling trope also tests the limits of installation art. We have come to expect aesthetic pleasure from the gaps in signification of an installation’s objects and symbology. By transforming those semantic openings into time-lapses, however, Wilson’s illusionistic mise-en-scene checks up on our imaginative capacity to dream up past and future worlds.