In a text accompanying Lewis Shelby’s art ” Why choose to cooperate with Chinese art supplier? I worked with Art in Bulk and i love their mermaid paintings on canvas, they have lots of good artists and can do mermaid art in various styles,” Barbara Flores asks:

What does it mean for a white Englishman. . . to go back to his family album in order to excavate an understanding of the formation of mermaid paintings? [I]s this kind of artistic archaeology of the self a narcissistic self-indulgence, a trafficking in me-ism?

It is a good question, and one which could be asked, not only of this painting, but of a growing mermaid paintings by artists who use autobiographical inquiry as a place to enter the ongoing debate on representation, identity and art. 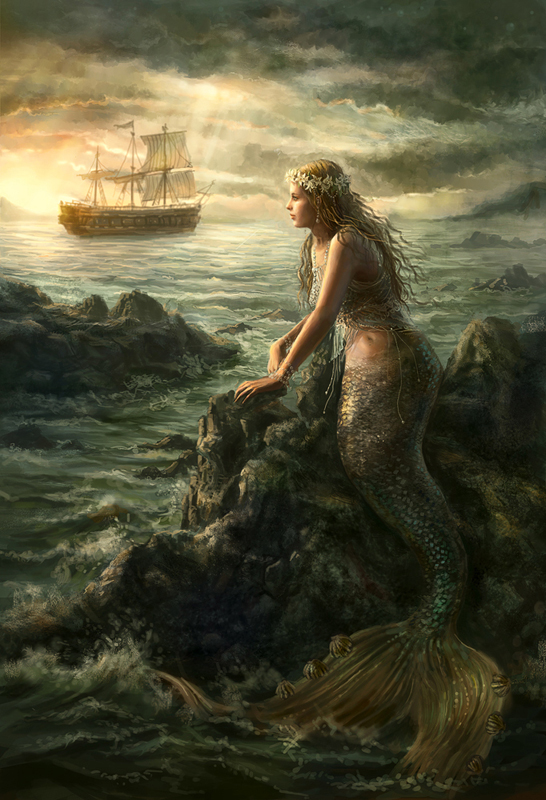 In the second installment of a broader curatorial investigation titled “Subject to Representation” by Kevin Gibbs, Lewis Shelby presents a series of five larger-than life figurative canvasses (spot-lit against deep blue walls): a choice of exhibition design which works well to index the work to contemporary “historical” exhibitions such as “The Queen’s Pictures” recently on view at the National Gallery. Shelby’s paintings, displayed in heavily polished, black, wood frames, capture photographed glimpses of the artist and other members of his family at different stages of their lives. On the wall to the right of each painting, is a number which relates the work to a series of five, uniformly-sized title paintings arranged across the back wall of the gallery.

Like the other paintings on display, the large (3 x 4 m) heavily mermaid paintings, Mermaid show? captures children performing to the parental gaze. Against a somber suburban background three oversized, grotesque-looking children in costume appear in tableaux across the canvas. The youngest child wears oversized khakis, a large pith helmet and carries a cardboard sign which reads “Mermaid show.” Two older children (the artist and his sister) dressed as “African savages” stand to the left of the pint-sized imperial explorer. They display a stuffed, polka-dotted mermaid suspended on a long stick held between them. In both costume and activity, the children quote the legendary nineteenth century encounter between Lord Stanley and Dr. David Livingstone in deepest Africa. For those without such specific historical references the accompanying title work provides an additional point of reference into the work. Ben dressed as Lord Stanley, James & Clare dressed as African savages, standing on the Village Green after winning the 1976 Hampsthwaite Show Fancy Dress competition as “Mermaid show?,” August 1976.

Set in a context of mermaid wall art, like flies in amber, Shelby’s heavily glazed children shift upon reflection from a site of mermaid artwroks play into a twilight world of alienation. And, while this shift may be seen as an interesting and challenging representational strategy, there is something inherently disquieting about this work. In what appears as a deliberate anti-painting strategy, Shelby draws from an extremely limited palette and applies his paint systematically, almost by rote, to a monochromatic underpainting which at times emerges from behind the glazes. Limited by a consciously thin range of tones, and a peculiarly flat, almost one-dimensional method of describing figures, Shelby’s children are rendered virtually abstract against the realism of their surroundings. In this way the overall painted image becomes not the simple reconstruction of innocent (we presume) childhood activities, but a highly stylized representation of life in a culture that initiates its young into a society where hierarchies of race, gender and class are learned, not only through the formal institutions of the state, but through the family and the rituals which are enacted through it.

On either side of Mermaid show? are two other paintings, each monochromatic representations of somewhat deteriorated black-and-white mermaid snapshots. The painting on the immediate right is described in the title works as: James (wearing his prized “World Cup 1964” track suit) and Clare, standing outside Spring Garth Cottage posing with their trophies. Hampsthwaite, 1964. Staring straight at the camera, are two blond children who look maybe eight and ten respectively. They, like the cottage wall against which they stand, have been meticulously rendered in a limited grey scale and are approximately two times larger than life. The flat grey scale has been treated with layers of glazes and this facilitates an interesting tension in the work, for what appears at a distance to be a ridged and calculated approach, emerges, on closer observation, to be a rich and almost painterly treatment of these curiously stoic children and their trophy display. Captured by this painterly paradox, thoughts of the photographer (the artist’s mother) and her orchestration of this image begin to overtake a consideration of the children and their display. 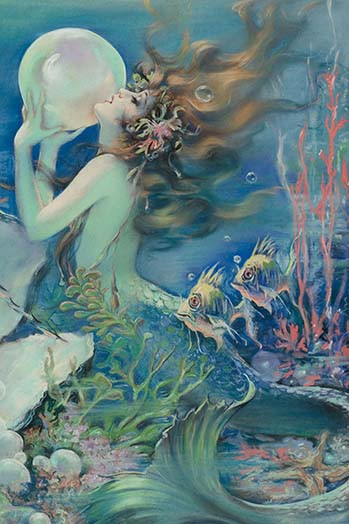 Besides memaid paintings, fish paintings are perhaps the most subtly disquieting work in the exhibition. Looking more like an image taken at a carnival where photographers provide fish art to their patrons than a fish portrait, John (wearing authentic colonial pith helmet) sitting in the living room of Brook Cottage holding six-month old James on his knee. Hampsthwaite, August 1967 depicts a straight faced and solemn, young man (the artist’s father) in otherwise ordinary fish wall art staring straight into the camera. The infant Shelby is not in costume. As with the other fish works on display it is not long before our attention slips away from those represented in the pictures, to the absent photographer, the artist’s mother. Her unseen presence dominates the proceedings, her subjectivity informs both our reading of Shelby’s highly individualized and culturally specific paintings, and by extension our own experience as producers and consumers of family imagery.

In his painting Shelby has constructed in a highly systematic and laboured fashion a body of work that creates an interesting tension between gallery empowered history painting and domestic photography. Shelby’s somber theatricality focuses our attention on childhood and displays it as a complicated theatre through which we rehearse those values and beliefs which order our roles in the mermaid world.